As Phuket hotels emerge from the dark clouds of lockdowns and travel restrictions during the pandemic, there is still uncertainty over what may come in the waning months of 2022 and into next year.

Seasonality is a recurring challenge for many resort destinations around the world, and Phuket despite Thailand’s mass tourism surge in 2018 and into 2019, it continued to have its ups and downs. Coming into the cusp of high season, winter season airline schedules are seeing a sharp rise in international airlift and restoration of direct flights.

That said, the Russian market in 2019 which is marked by average lengths of stay between 9-12 days accounted for over 900,000 travelers to Phuket. This year, international sanctions on Russian airlines, the widespread drop of the Russian ruble, and political gyrations will likely see the winter snowbird market hit only 15-20% of this demand level.

Mind you, there will be Russians and they will be spending more and staying longer according to our talks with tour operators, but there will be far fewer of them. As for Mainland China, it looks as if this story is set to move into 2023 given its zero-COVID policy is unchanged.

For Phuket hotels, edging out of the pandemic and what is no doubt the start of a new business cycle, it’s important to see what can be learned from history. Combining STR and C9 Hotelworks data and analysis, the following charts show the demand or occupancy and average rate fluctuations within a given year and go on the show a ten-year pattern. 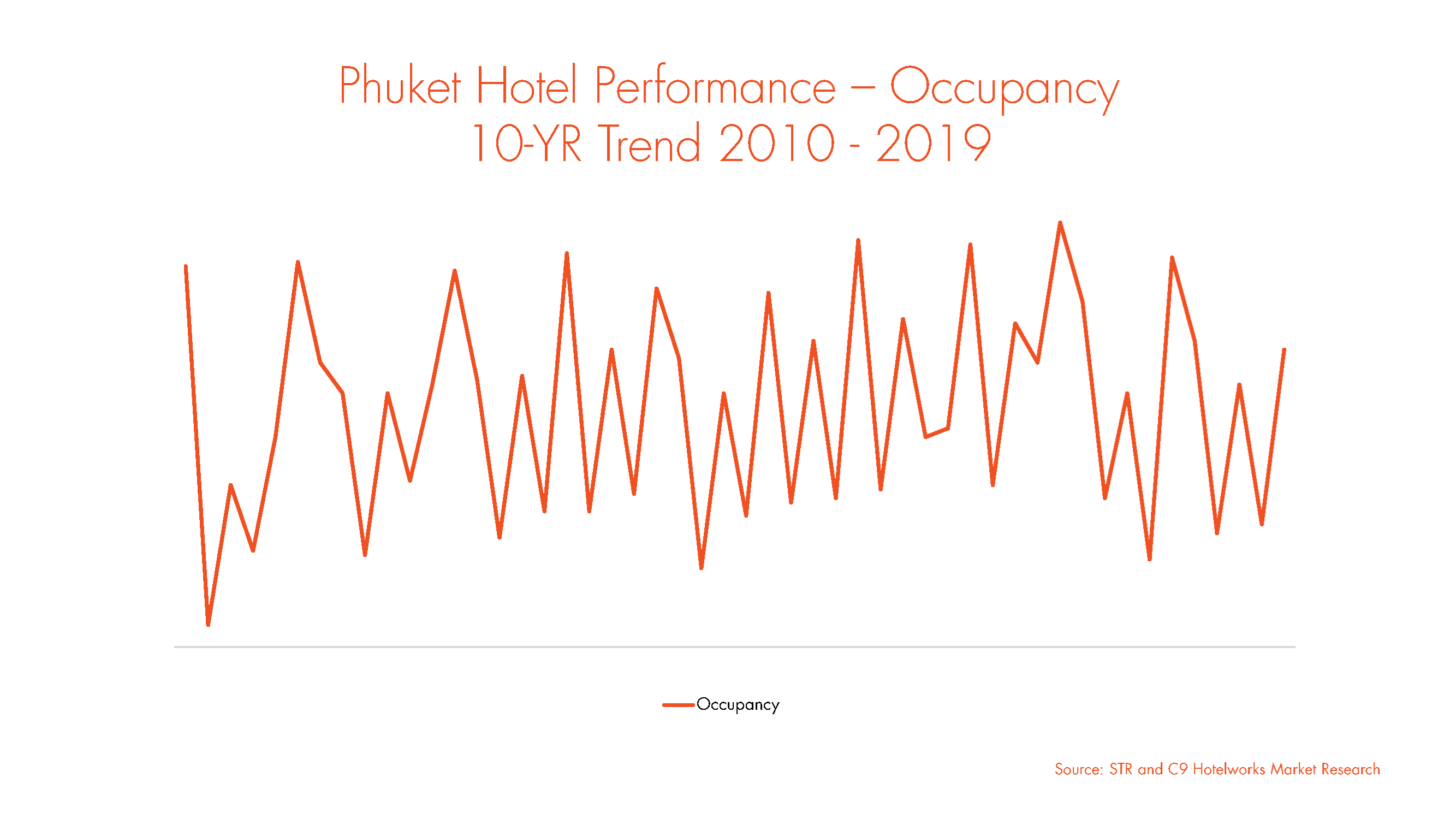 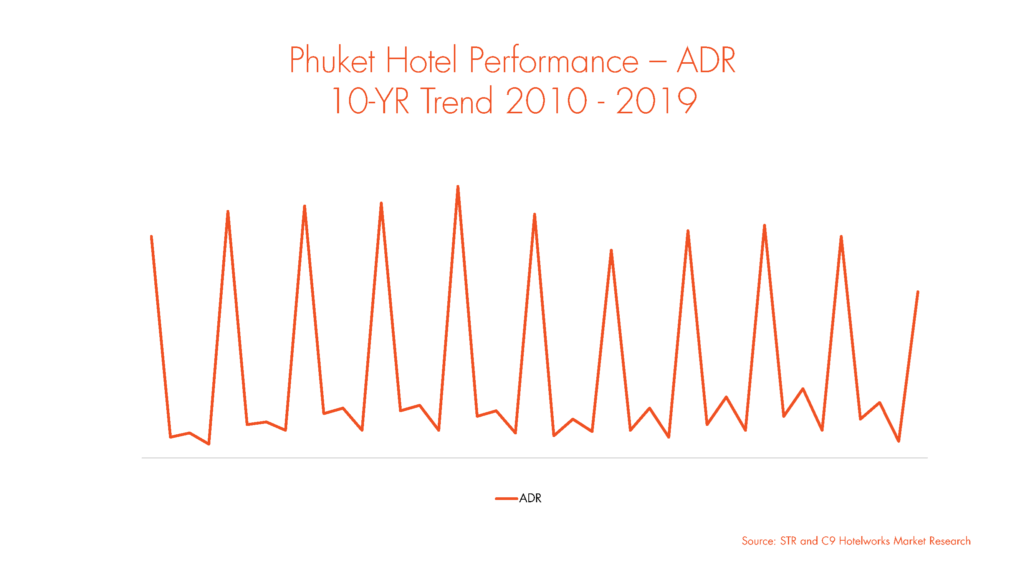 Speaking to the extreme swings between highs and lows of Phuket hotels over the past decade, STR’s Senior Director of Asia Pacific said “island occupancies have shown a fairly consistent pattern year-on-year, with some softening on the edges of shoulder season. Turning to a graph that shows annualized marketwide performance, it resembles a heart attack, with data showing that between June to January there is a 30% gap in islandwide demand.

Moving to room rates, historical data for the 10-year pre-pandemic period showed that average daily rates are 200% higher during peak periods, but that the lowest rates often occur for up to 6 months between May to October, regardless of occupancy.”

In other words, hotels continue a pack mentality and effectively double down on rates when the low season rolls around. It’s feast or famine for many hotels, and for some owners, they make up to 70% of their profits in high and peak periods. While the rest of the year, they try to eke out as much as they can in the lean times, often slashing labor costs through the use of contracted labor which is let go as demand drops.

What is apparent from the data is that the island’s highly leveraged mass tourism segments continue to be winter-centric. Wholesalers and/or tour operators that are specific to volume markets continue to have a massive influence on rates, and dynamic pricing falls over in the face of negotiated seasonal pricing. You can talk all you want about the future dominance of direct hotel bookings but the reality is on an island that is fast approaching 100,000 licensed hotel rooms according to C9 Hotelworks latest Phuket Hotel Market Review, volume markets continue to be in the driver’s seat.

So, what’s the answer to creating a more stabilized annual trading pattern? New markets such as the Middle East, especially Saudia Arabia where travelers embrace the rainy season will help. But, the fact is also that low periods will continue to exist and the best strategy is to lessen the rate differential between peak, high and low seasons, look at ways to generate more low season demand, and price up accordingly. There tends to be a trend that hotels simply look at their STR comp set and move rates in reaction to what competitors do.

For now, as Phuket moves into a new cycle, it is also an opportunity to change its approach to pricing and be bolder and more confident, given a likely return of airlift and yes, eventually China will return to the playing field.

Eat, Pray, Sleep Bali-Style. How I Escaped the Box

Category: Hotels, Posted:28 Nov 2022 | 14:20 pm It’s been nearly thirty years since luxury hospitality innovator KP Ho and Banyan Tree took hotel guests out of the box and into their own private villa with a swimming pool in Phuket Thailand. At the time, the idea was radical, captivating, and edged over the boundary of hospitality norms. Fast forward to 2022 and […]
Read more

Category: Hotels, Posted:15 Nov 2022 | 08:10 am Makings news in Phuket is the signing by Minor Hotels of their first NH-branded property in Asia. The 270-room Boat Lagoon Resort has been converted and is now operated by NH. NH is part of Minor Hotels and has over 330 properties in Europe and the US. Under Minor, the Anantara brand has been expanding […]
More Insider News